We asked our customers what issues they face in the garden and the top responses were Weeds and Bugs.  Today we're going to tackle the Weeds issue.


Raised Beds
Because of gophers and rabbits, all of our gardens are raised beds.  This isn't economical for everyone but it keeps out pests and weeds!  When we built our beds, we laid out cardboard under the beds.  Each raised bed also has gopher wire or chicken wire stapled to the bottom. 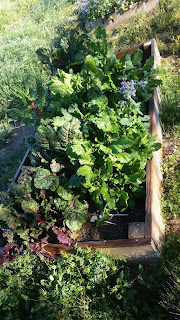 Plenty of weeds around the outside of the beds and just veggies growing inside the bed!
For building instructions, see our tutorial Build Your Own Raised Beds

Mulch garden beds
Tom Lanini, a professor of plant sciences at the University of California Davis, said mulch is the most important factor in preventing weed growth. Nearly any barrier that blocks light works as a mulch. Bark and other decorative mulches work, but dried leaves, cardboard and newspapers are also effective.
Burn weeds
As a chemical-free alternative, though it still uses gas, Lanini recommends torching weeds with small landscape flamers, which are hooked to standard propane tanks. He said this method is quick and effective for ridding weeds in sidewalk cracks and lawn edging.
Boiling water – this is more effective than many expensive chemical herbicides. Just boil water and pour it on your weeds, but do NOT pour it on your plants because it will kill them too. In fact, it will kill anything you pour it on, including the beneficial creatures, so use with caution.
Vinegar – this works best on young plants because it will not kill the roots of well-established plants. For tougher weeds spray several days in a row to kill the weed leaves, just be careful not to spray your plants!
IF you choose to use a spray, even organic, please be aware that it will kill your veggies as well as weeds.  DIY organic sprays are a much safer alternative than synthetic chemicals and are great for sidewalk cracks where weeds spring up.
I have never used a spray but the recipe I found is below
1/2 cup liquid dish soap (PLEASE use an organic option such as Dr. Bronner's)
1 gallon white vinegar (yes, there are organic options)
1/4 cup salt
Mix all ingredients and add to a squirt bottle
EAT THE WEEDS!
Many people are unaware of the benefits of some of those pesky weeds.  **Please be sure to properly identify plants before consuming anything**
From Treehugger


DANDELION
Dandelion leaves can be harvested at any point in the growing season, and while the smaller leaves are considered to be less bitter and more palatable raw, the bigger leaves can be eaten as well, especially as an addition to a green salad. If raw dandelion leaves don't appeal to you, they can also be steamed or added to a stir-fry or soup, which can make them taste less bitter. The flowers are sweet and crunchy, and can be eaten raw, or breaded and fried, or even used to make dandelion wine. The root of the dandelion can be dried and roasted and used as a coffee substitute, or added to any recipe that calls for root vegetables.
PURSLANE
Purslane can often be found in moist garden beds, lawns, and shady areas, where it lies close to the ground and often goes unnoticed. This humble garden weed, however, is a nutritional powerhouse, as it is said to contain more omega-3 fatty acids than any other leafy vegetable, and can be a great addition to a salad or stir-fry, or used to thicken soups or stews. Purslane is a succulent, with a crispy texture, and the leaves and stems can be eaten raw or cooked to add a peppery flavor to any dish.
CLOVER
Other than the occasional four-leafed clover hunt, this common lawn weed goes mostly unnoticed, but is an important food for honeybees and bumblebees, and clover leaves and flowers can be used to add variety to meals. Small amounts of raw clover leaves can be chopped into salads, or can be sauteed and added to dishes for a green accent, and the flowers of both red and white clover can be eaten raw or cooked, or dried for tea.
LAMB'S QUARTERS
The young shoots and leaves of Lamb's Quarters (also known as goosefoot) can be eaten raw in any vegetable dish, or sauteed or steamed and used anywhere spinach is called for. The seeds of the Lamb's Quarters, which resemble quinoa, can also be harvested and eaten, although it takes a lot of patience to gather enough to make it worthwhile.
PLANTAIN
This common lawn weed (not to be confused with the tropical fruit also called plantain) is not only a great medicinal plant that can be used topically to soothe burns, stings, rashes, and wounds, but is also a great edible green for the table. The young leaves of plantain can be eaten raw, steamed, boiled, or sauteed, and while the older leaves can be a bit tough, they can also be cooked and eaten as well. The seeds of the plantain, which are produced on a distinctive flower spike, can be cooked like a grain or ground into a flour, and are related to the more well-known psyllium seeds, which are sold as a fiber supplement and natural laxative.
WILD AMARANTH
The leaves of the wild amaranth, also known as pigweed, are another great addition to any dish that calls for leafy greens, and while the younger leaves are softer and tastier, the older leaves can also be cooked like spinach. The seeds of the wild amaranth can be gathered and cooked just like store-bought amaranth, either as a cooked whole grain or as a ground meal, and while it does take a bit of time to gather enough to add to a meal, they can be a a good source of free protein.
CURLY DOCK
Curly dock (also called yellow dock) leaves can be eaten raw when young, or cooked when older, and added to salads or soups. The stems of the dock plant can be peeled and eaten either cooked or raw, and the mature seeds can be boiled, or eaten raw, or roasted to make a coffee substitute. Dock leaves are rather tart, and because of their high oxalic acid content, it's often recommended to only eat them in moderation, as well as to change the water several times during cooking.