FOOD.  Without food, we would not survive.  Whether you are aware or not, our food choices make an impact every single day. 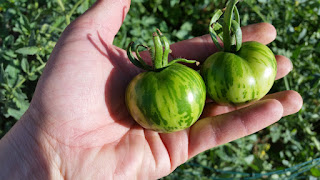 From Ecocentric
"Simply put, food is at the juncture of some of the most important issues facing our society (and world!): conservation, climate change, animal welfare, corporate control and consolidation, public health, fair labor and immigration, to name a few."


Now more than ever, the food choices we make are critical to our body and the planet.  It seems that every month, there is a new herbicide or pesticide approved for use on food.  More genetically modified or engineered "phood" are being approved and planted.  Commercial farming and factory farming are heavy pollution producers.


-Pesticides kill
"The World Health Organization estimates that there are 3 million cases of pesticide poisoning each year and up to 220,000 deaths, primarily in developing countries. The application of pesticides is often not very precise, and unintended exposures occur to other organisms in the general area where pesticides are applied."


The stats above don't even take into account the cancer rates associated to pesticide use and consumption.


-We are losing seed & food varieties
From Protecting Seed Diversity & Our Future
"Using the metaphor of a tree, it charts the loss of U.S. seed variety from 1903 to 1983. And what you see is that we’ve lost about 93% of our unique seed strands behind some of the most popular produce"


-Global Corporations Control Commercial Seeds & Food production
From Protecting Seed Diversity & Our Future
" Today, three corporations control 53 percent of the global commercial seed market."
-Some of the imported food that the USDA deems edible are grown in toxic conditions!
From Are you Eating Toxic Garlic
"Garlic can be whitened by using chlorine or with a mixture of sulphur and wood ash. Whitening garlic helps to make it look healthier and more attractive to consumers. In fact this obsession with white foods has lead to the bleaching of many food products (flour, salt, sugar) using chlorine dioxide or benzoyl peroxide."
"Nearly 200 million farmers in China, India, Vietnam, sub-Saharan Africa, and Latin America harvest grains and vegetables from fields that use untreated human waste."
Your choices make a huge impact on food and you are not alone.  There is a growing movement in this country to make better, healthier food choices.  More people are choosing to grow their own food and not just veggies and herbs.  Humanely raising meat is one of many ways to make a positive change.  Some call it homesteading and for some it's just a way of life.

What steps can we make to create a positive change?


-Plant for the BEES to ensure continued success in the garden


Since food is daily decision, each day brings a new opportunity to create a positive impact.  We're all in this together.  2017 will be our largest garden ever and a chance to continue making great things happen.  Mary's Heirloom Seeds will continue our efforts to protect seed diversity.  We will continue to volunteer at schools and other organizations.
Will you join us?
I hope you have enjoyed another educational article from Mary's Heirloom Seeds!

Thank you so much for sharing how the food choices we make are more critical to our body and the planet now, than ever, at the Healthy Happy Green and Natural Party Blog Hop. I’m pinning and sharing. Wishing you a healthy, happy year ahead!

This is a great post! Thank you for bringing awareness to these issues. -Marci @ Stone Cottage Adventures

Growing Tatume Squash from Seed to Harvest Posted on 10 Jun 16:28

How to Grow Thai Roselle from Seed to Harvest Posted on 18 May 05:25