Thank you for joining us at Mary's Heirloom Seeds for another educational article about Growing Food!
Do you have plants that look sickly or would you like to avoid sickly plants?  Below are examples of plant diseases and how to avoid or cure them in your garden.
From Planet Natural,
"Disease fungi take their energy from the plants on which they thrive. They are responsible for a great deal of damage and are often encouraged by wet weather, poor drainage or inadequate airflow. Plant diseases are characterized by a variety of symptoms, including moldy coatings, wilting, scabs, blotches, rusts, and rot.
Disease info from Garden.org
(I do not recommend their pesticide suggestions)

Bacterium Wilt
This disease occurs over most of the United States. It affects cucumbers and muskmelons and, less commonly, pumpkins and squash. Individual leaves wilt during the heat of the day, but recover overnight initially. As the disease progresses, part or all of the vine wilts and dies. To test for the disease, cut a wilted stem near the base of the plant. Squeeze the sap out of the stem. If it is sticky and white and forms a thread when the tip of a knife is touched to it and drawn away, bacterial wilt is probably present. (This test works best with cucumbers.) The disease overwinters in the gut of cucumber beetles, and is spread to plants as the beetles feed.
Prevention and Control
Controlling cucumber beetles is the key to prevention. Look for varieties of cucumbers and squash that are resistant to cucumber beetles. Cover young plants with floating row covers. Knock, shake, or hand pick beetles off plants and out of flowers, and clean up plant debris to reduce the number of overwintering adults. 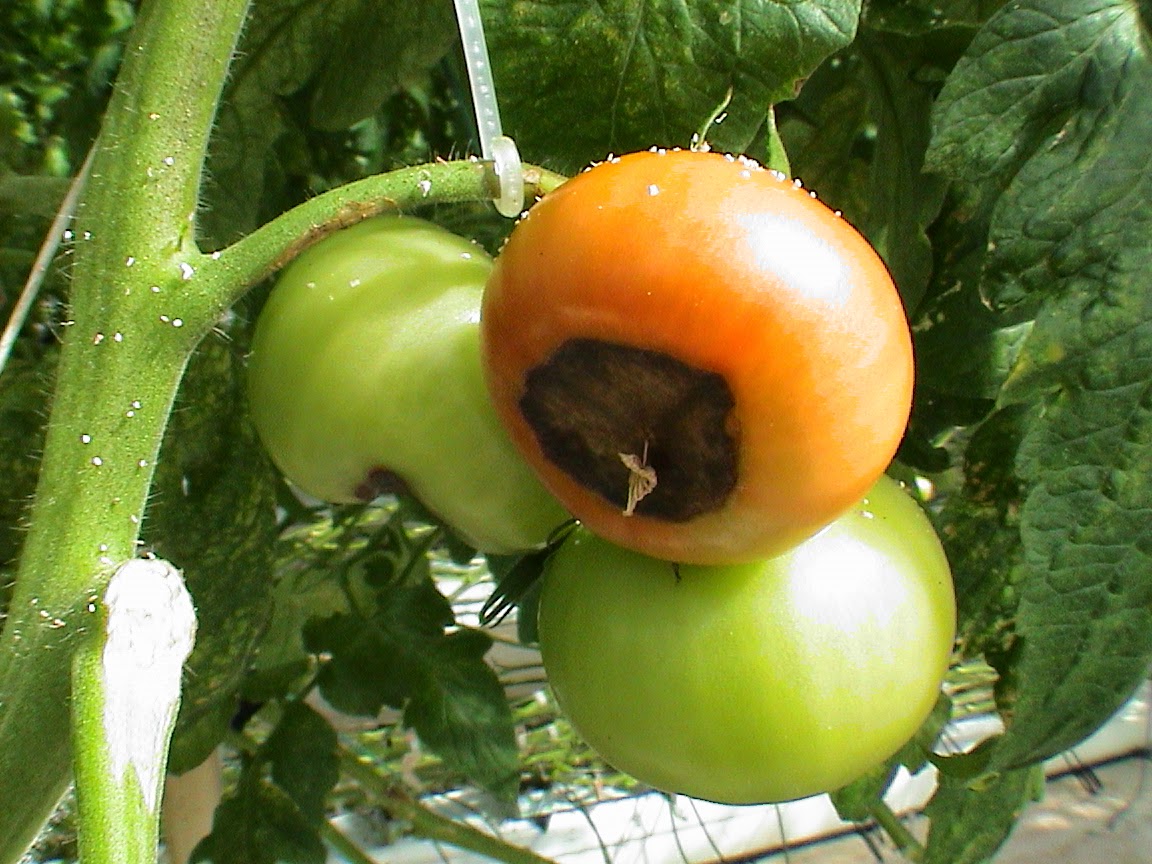 Blossom End Rot (BER) is a physiological disorder of tomatoes, peppers, and cucurbits caused by a calcium imbalance within the plant. Fluctuations in soil moisture, excessively wet or dry soil, excessive nitrogen fertilizer, roots damaged by cultivation, very high or low pH, or soils high in salts prevent all can the roots from taking up enough calcium to satisfy the plant's rapid cell development. The result is a water-soaked spot at the blossom end of the plant that enlarges, turning dark brown and leathery. Rot may set in at the spot. BER is common when plants grow rapidly in the beginning of the season, then set fruit during dry weather. As little as 30 minutes of water deficiency at any time can cause BER.
Prevention and Control
Keep plants uniformly watered throughout the season. Water deeply; wet the soil at least 6 inches down. Apply mulch to maintain soil moisture. Keep soil pH around 6.5. Some older varieties of indeterminates (vining tomatoes) and plum tomatoes are more susceptible to BER -- make very sure they have adequate soil moisture.  Read Using Calcium in the garden for Healthy Soil

Early Blight
This fungus disease attacks tomatoes and potatoes over most of North America. Plants under stress or with a heavy load of fruit are most susceptible. Dark brown spots with concentric rings in them form on older leaves first. Infected leaves turn yellow and die. Potato tubers are covered with brown, corky spots. Tomato fruits may sometimes be infected; a black, sunken, leathery spot forms at the stem end. Warm, moist conditions encourage disease development. The fungus overwinters in plant residues in the soil.
Prevention and Control
Plant in well-drained soil where air circulation is good. Rotate crops and destroy any volunteer potato or tomato plants. Don't wet foliage when watering. Amend soil with compost, and fertilize plants judiciously to maintain plant vigor. Tomato plants with early blight slowly lose their leaves, but unless the infection is severe, you can usually harvest mature tomatoes. 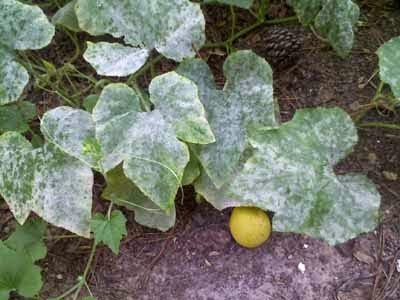 This fungus disease occurs all over the North America and infects a wide variety of plants, including beans, cucumbers, squash, lettuce, and peas. A powdery white growth covers the upper surface of leaves, which eventually turn yellow and dry. Older leaves are usually infected first. The fungus competes with the plant for nutrients, reducing yields and weakening or even possibly killing it if infection is severe. Fruits and pods may also be covered with mildew. This disease usually develops late in the season on mature plants and thrives in both dry and humid weather. It can spread rapidly.


From a recent facebook post:
"We had a really great question asked recently: "Do you have powdery mildew resistant squash?"

ANSWER: Most varieties (not all) that claim to be "mildew resistant" are hybrids. We offer only heirlooms. There are a number of ways to reduce your risk of powdery mildew
Plant cucurbits in full sunlight. The powdery mildew spores have a difficult time surviving in direct sunlight.

Provide plants with sufficient spacing. Cucurbits need proper spacing to increase air circulation and to help prevent powdery mildew spores from spreading from one plant to the next.

Disinfect any tools after working around cucurbits. If you use a tool around summer squash, for instance, disinfect the tool before working around cucumbers. If the tool isn’t disinfected properly the powdery mildew spores could mistakenly be passed from one plant to the other. Disinfect tools with full strength vinegar or a solution of one part bleach to nine parts water.

Avoid watering cucurbits in the evening. Allowing the leaves to remain damp over night can increase the likelihood of powdery mildew. Water plants in the morning so the leaves have a chance to dry out before dusk. It is better to water the soil around the plants and avoid getting the leaves wet.

If leaves begin showing signs of powdery mildew ( small white or gray spots on leaves) remove the infected leaves from the plant and discard in trash. It is not recommended to place infected leaves in a compost pile."


Baking Soda Spray
(I do not use this recipe)
Combine 1/4 tsp. of baking soda with 1 qt. of water in a large bowl.
Stir the mixture to dissolve the baking powder.
Pour the solution into a spray bottle.
Spray the solution on infected plants twice a day to remove the powdery mildew.
For additional DIY recipes and remedies, see our Organic Pest Control articles

If you have additional questions, please feel free to ask!