Every day is a new opportunity to learn and grow.  Lately I have been fascinated with Soil and all of the living organisms found in the garden.

Here's what I've found from the experts...

From Organic Guide,
"The life sustaining ability of soil is best understood by appreciating the complex cycles of decay and erosion. Its natural formation occurs in a series of layers starting at the surface but gradating down to the deepest bedrock. The surface layer is where active decomposition begins. Exposure to atmospheric elements, surface warmth and moisture helps to break organic matter into loose mulch like material. At the microscopic level, this layer is teeming with a diversity of bacterial, fungal and algal life forms. In combination with larger organisms like beetles and worms they provide the additional recycling activity to enable minerals and nutrients to be retrieved from the decaying organic matter and returned to the soil. Another family of soil based micro-organisms are involved in relationships that enable plants to absorb nitrogen from their roots.
Ideally the layer directly beneath the surface will be humus rich topsoil. The quality of this topsoil will depend on the amount of organic material available near the surface and the activity of the recycling organisms."

Your soil is ALIVE!!!

"Soil organisms, which range in size from microscopic cells that digest decaying organic material to small mammals that live primarily on other soil organisms, play an important role in maintaining fertility, structure, drainage, and aeration of soil. They also break down plant and animal tissues, releasing stored nutrients and converting them into forms usable by plants. Some soil organisms are pests. Among the soil organisms that are pests of crops are nematodes, slugs and snails, symphylids, beetle larvae, fly larvae, caterpillars, and root aphids. Some soil organisms cause rots, some release substances that inhibit plant growth, and others are hosts for organisms that cause animal diseases.
Since most of the functions of soil organisms are beneficial, earth with large numbers of organisms in it tends to be fertile; one square metre of rich soil can harbour as many as 1,000,000,000 organisms." 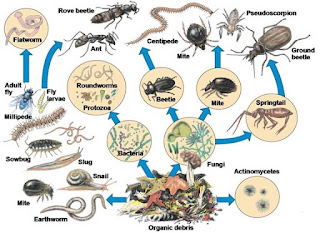 Some soil organisms have a close, mutually beneficial (symbiotic) relationship with plants. Two examples include rhizobia and mycorrhizae.
Rhizobia are bacteria that form symbiotic associations with legumes such as beans and peas.  The bacteria form nodules on the roots of the host plant in which they fix nitrogen gas from the air.  Rhizobia supply the plant with nitrogen and in turn the plant supplies the bacteria with essential minerals and sugars.  It may be helpful to add Rhizobia in the first planting of beans and peas in a soil area.  Afterwards they will be present.
Mycorrhizae are specific fungi that form symbiotic associations with plant roots.  Found in most soils, they are very host-specific (i.e., each plant species has specific species of mycorrhizae associated with it).
The Latin word mycor means fungus and rhiza means root. The terms “mycorrhiza” (singular) or “mycorrhizae” (plural) refer to the tissue that forms when fungi and roots develop a mutually beneficial relationship. Enlarging the surface-absorbing area of the roots by 100 to 1,000 times, mycorrhizae create filaments or threads that act like an extension of the root system.  This makes the roots of the plant much more effective in the uptake of water and nutrients such as phosphorus and zinc. In exchange, the fungus receives essential sugars and compounds from the roots to fuel its own growth. Some species of mycorrhizae can be seen on roots, while most are invisible to the naked eye.
Mycorrhizae improve plant health. They enhance the plant’s ability to tolerate environmental stress (like drought and dry winter weather) and reduce transplant shock.  Plants with mycorrhizae may need less fertilizer and may have fewer soil-borne diseases.
A by-product of mycorrhizal activity is the production of glomalin, a primary compound that improves soil tilth.  In simple terms, glomalin glues the tiny clay particles together into larger aggregates, thereby increasing the amount of large pore space, which in turn creates an ideal environment for roots.


I hope you've enjoyed our all of the information I have compiled so far.  Are you growing your own food?  Without a doubt, healthy soil is essential for healthy crops!